Have you ever stopped to reflect on the complexity of producing a film? Take Hollywood productions, for example. Hundreds, and sometimes even thousands of professionals can be involved in the making of a blockbuster movie. From the head of special effects to individual make-up artists, everyone needs to know exactly what he or she needs to be doing so that everything stays on schedule and goes ahead as planned. A little slip can be catastrophic. When that same level of complexity starts to appear in the corporate world, it’s essential to find a tool in the mould of the RACI matrix.

However, contrary to what you may imagine, the RACI matrix isn’t just used in major projects in the vein of blockbusters. In fact, it is mainly used for routine, day-to-day operations and by teams that are vastly smaller than the ones that work in big movie studios. It’s a valuable management tool that can make a major difference to your role as a leader, irrespective of your team’s size. And that’s why you need to learn more about it.

>> Recommended reading: How to make your workflow more efficient and help your business grow

What is the RACI matrix?

“RACI” is an acronym for Responsible, Accountable, Consulted and Informed. The RACI matrix is a tool through which each employee is made aware of their assignments during a particular project. In essence, it is a distribution matrix for responsibilities.

RACI works through the use of a graphics system that displays the project’s objective and the required role of each participant in helping to reach that goal. It was created to eliminate confusion when defining the role of each team member (something that occurs regularly) and increase project efficiency.

What are the roles assigned by the matrix?

As we have seen, there are four roles:

Accountable: the person who has the ultimate authority for approving the project. In the case above, that role would fall to the project manager;

Consulted: the people who are consulted regarding the project, whether they work within the company or not. These participants are often experts, whose role is considered valuable or essential to the completion of the project, and who contribute to the execution of any tasks. In this case, there is two-way communication;

Informed: These are clients, stakeholders or anyone else who needs to be informed about the project’s progress. They are notified of any results or actions taken but need not be involved in the decision-making process. Here, there is just one-way communication.

When these roles are efficiently distributed and well-defined, decisions are made more rapidly, there is increased accountability, and the workflows are much more organized.

An example is always useful

Imagine that your agency received a briefing to create a new web portal for a client. Suppose you are the project manager, George is the art director; Mark is the writer; Sandra is the programmer; Louise works with customer service, and Fiona owns the agency.

In this case, we would have:

To illustrate this point better, take a look at this RACI matrix template: 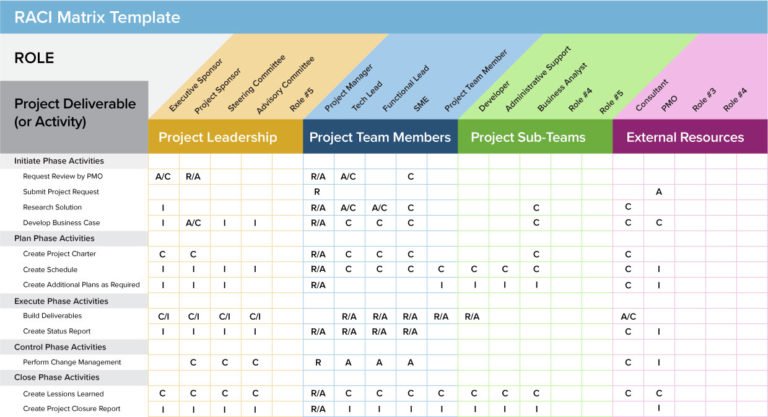 This template can be presented to the team in a variety of ways: whether it is using a handwritten chart, a dashboard, or a spreadsheet. What’s most important is that it should easily seen by everyone concerned and that they all clearly understand their expected roles.

Why is the tool useful?

The matrix is useful because it clearly states which tasks each team member must perform to finalize the project, in addition to defining their roles throughout the job. It is also therefore possible to make sure the distribution of responsibilities is balanced. For example, you can verify which project managers have been placed more or less frequently in the role of Responsible, thereby alternating the position.

Using a RACI matrix ensures that projects are executed more efficiently since every participant sees how each of the tasks is progressing. The tool allows managers and leaders to have the right discussions with the appropriate people, thereby saving time and resources.

It is also worth noting that using a RACI matrix in your business will allow you to involve more qualified people in your projects. What is more, the tool is easy to implement.

In short, using the RACI matrix, you can:

A tool to guarantee the implementation of a RACI matrix

If you want to guarantee the best possible implementation of a RACI matrix, you should rely on management software like Runrun.it. It has virtually the same functionality as the matrix because it lets you assign tasks with complete precision, setting priorities according to the roles determined in the matrix. Get organized, avoiding disarray and wasted efforts. Sign up for a free trial now at http://runrun.it